Hello, my lovelies! I am so, so happy to share a wonderful story with y'all today. :) I had the immense privilege of actually meeting Julie Lessman in person last summer and let me just say that she is a delight! I'd had her books on my radar for quite some time, but it wasn't until hearing her speak about the personal ties this particular series is based around that I knew I had to read her stories. And I have been anything but disappointed! They just have a way of wrapping around my heart. :) So let's get to the fun stuff, shall we? 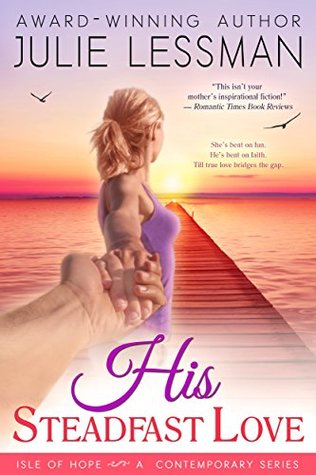 Oh, reader friends, can I just start out saying how very much I love the O'Bryen family? The way they tease and pick at each other, yet the fierce love that holds them together no matter what...ah my heart! This family is truly one of my favorites in fiction. Yet the beauty of this story is so much more than just wonderful familial relationships, it's the search for true forgiveness and the deep love that is the foundation of it. And it's that journey which Cat and Chase traverse that kept the pages rapidly turning for me.

I was uncertain what I would think about Cat, herself, when I started this book. Considering how much I loved Shannon, her twin in Love Everlasting, and how much Shannon loves Cat, I had a hunch she'd probably grow on me and oh how she did! Cat is so very lovable, yet she has no idea how much. Because of lies she's believing about herself, she ends up making a few bad choices which could've led her somewhere terrible. Yet it's that very lovableness about her that keeps her family and friends from giving up! And it's her inherent "Cat"-ness that made me wish I could be her friend in real life, the fact that she keeps choosing the hard road, yet deep inside she hasn't really forgotten hope. She thinks she has, she thinks she's gone off the deep end and is drowning, but she hasn't. Not really. Hope is still clinging fiercely, no matter how she tries to deny it.

It's that hope that Chase sees in her that makes certain he never gives up on her. But his journey isn't over yet either, he has his own lessons to learn. (Which made me happy that we get to see things from his perspective as well! I loved being able to spend some time in his head, especially when he was around Cat.) Watching these two characters stumble their way around each other, trying to deny their attraction, failing miserably at that (because the entire world can see it! These two have crazy chemistry, folks. Seriously! ;), and building a true friendship in spite of it all, it just warmed my heart. Even as Chase struggles to keep his attraction settled so that he can focus on Cat's heart, my own heart absolutely swooned at how well he cared for her. The rapport between them, the way they trust each other no matter what, simply the way Chase was constantly building her up and refusing to let Cat dwell on the negatives, I loved every bit of it! But seriously, you can't convince me that Cat's family didn't have ulterior motives when it came to throwing she and Chase together in the beginning. They may have said that it was all due to their worry for Cat, but I just can't imagine they didn't want the relationship to blossom for more reasons than that! ;D

One of the aspects of the novel that I particularly enjoyed, about as much as the swoony romance itself, is the idea of forgiveness and how, sometimes, we can harbor bitterness and anger and be totally unaware of it. So much truth that the characters learned spoke to my own heart! And isn't that what a story should do? Entertain the reader, for sure, but go so much deeper and help us to perchance begin to understand ourselves? Kudos to Ms. Lessman for delving into her own heart in order to bring an entire series about HOPE that inspires those like me! :) And also for bringing back memories of my own trip to Savannah and how much I love that historic district. Reading this story just made me want to go back all the more! So be sure to check this one out, friends. I really think you won't be disappointed! :)

She cried her heart out for a solid ten minutes until her heaves thickened and slowed, the front of his shirt near sopping. He rubbed her arms. “Feel better?” His lips tipped when she allowed a few jerky nods against his chest, and fishing out a wad of tissues, he nudged them into her hands. “Here. My shirt is soaking wet, kiddo, and I’m a little worried it’s not all saltwater.”

“It’s not,” she said with a soggy smile, promptly blowing her nose several times. She blotted a handful of fresh tissues against the wet spot on his shirt. “One of the pitfalls of being a pastor, I suppose.”

“Or a good friend,” he said softly, wondering if she had any inkling how attracted he was to her. He hoped not because Cat was the type of woman who would use that to her advantage, and he couldn’t afford that. He’d worked too hard at keeping his distance.

A lesson learned the hard way.

“Hey,” he said with a duck of his head, compassion warm in his eyes, “wanna talk about it?”

With a soft moan, she flopped back against the console seat like a ragdoll. Resting her head, she stared up at a section of the headliner that was just beginning to buckle on the roof of his car, arms limp at her sides. “What’s there to talk about? My lifeline is gone, so I have to learn to go it alone, I guess, without Shannon there every minute of every day.”

“Hey, you still have Davey and your mom and Ben, with Jack and Lacey right next door,” he said, hoping to remind her how lucky she was to have the family she had.

A groan ground from her lips. “Oh, super. A twenty-six-year-old spinster in the same house with mommy, daddy, and little brother. One, I might add, who has to wear earplugs at night so she can’t hear what’s going on in her newlywed mother’s room.” A shiver rumbled her shoulders. “No, thanks. And Jack and Lacey are just as bad when they come over, always playing kissy-face.” Her nose lifted in a scrunch. “Face it, Rev, I might as well be alone.”

“Not alone,” he said carefully, pausing long enough to make a point. “There is another lifeline, you know.”

A low groan slipped past her lips as one eyelid edged up. “You’re not going to start talking to me about God, are you?”

He grinned as he reached toward the cup holders beneath the dash, handing her coffee over before he took a sip of his own. “I’m a pastor, Catfish, what do you think?”

She sat up and snatched the cup with a stubborn bent to her chin. “Well, I’m not on speaking terms with God right now, so you can just shelve the sermon till Sunday.”

His smile faded as he studied a profile that could have been etched in stone. “How ’bout shouting terms then? He’ll take whatever He can get, Catherine,” he said quietly, “because His love for you never changes no matter what you say or how you say it.”

“Ha! Sure not willing to test a lightning bolt on that one, Rev, not with a God who’s burned me before.” She took a quick glug of her coffee, gaze hard and fixed straight ahead.

She swiveled to face him, mouth gaping. “How? A God who allows my father—a man devoted to Him, no less—to abandon his family, then turns right around and does it all over again with cancer?” She issued a grunt. “Sorry, but that doesn’t inspire a whole lot of trust in me.”

“The affair was your father’s choice, Cat, not God’s,” he said quietly.

She scorched him with a glare. “But He didn’t stop him!” she screamed, the cup quivering in her hand. “Anymore than He stopped Lacey from stabbing me in the back when she’d been my best friend, or Kyle from dumping me in college because I was too blinkin’ pure. I did nothing wrong!” she shouted, “and He’s supposed to be God, all powerful, all loving! He could have stopped Dad, but He didn’t! Yes, the burden of sin was on Dad’s shoulders, but tell me, Chase, what did Mom, Jack, Shan, and I do to deserve having our hearts and lives ripped apart at the seams? All we ever did was honor God, loving Him and trusting Him like Dad always taught us to do.”

She straightened slowly, shoulders squaring almost imperceptibly while that formidable chin rose, as defiant as the gleam of anger in her eyes. “But your so-called loving God did nothing, so tell me, Chase, please, because I really want to know. What good is a God who hangs His own out to dry?” Turning away, she held the cup with both hands, body trembling while rivulets of tears slithered her face.

So that was the crux of her pain, then. Chase exhaled a quiet sigh. He thought so. It had been Jack’s beef with God when Chase had confronted him last year and now apparently Cat’s too. The root of rebellion shackled to their greatest fear.

That God didn’t really love them at all. 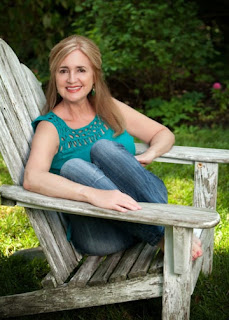 Julie Lessman is an award-winning author whose tagline of “Passion With a Purpose” underscores her intense passion for both God and romance. A lover of all things Irish, she enjoys writing close-knit Irish family sagas that evolve into 3-D love stories: the hero, the heroine, and the God that brings them together.

Author of The Daughters of Boston, Winds of Change, and Heart of San Francisco series, Julie was named American Christian Fiction Writers 2009 Debut Author of the Year and has garnered 18 Romance Writers of America and other awards. Voted #1 Romance Author of the year in Family Fiction magazine’s 2012 and 2011 Readers Choice Awards, Julie was also named on Booklist’s 2010 Top 10 Inspirational Fiction and Borders Best Fiction list.

Julie’s most recent novel, Isle of Hope was voted on Family Fiction magazine’s Best of 2015, and Surprised by Love appeared on Family Fiction magazine’s Best of 2014. Her independent novel A Light in the Window is an International Digital Awards winner, a 2013 Readers' Crown Award winner, and a 2013 Book Buyers Best Award winner. Julie has also written a self-help workbook for writers entitled Romance-ology 101: Writing Romantic Tension for the Sweet and Inspirational Markets. You can contact Julie through her website and read excerpts from each of her books at www.julielessman.com. 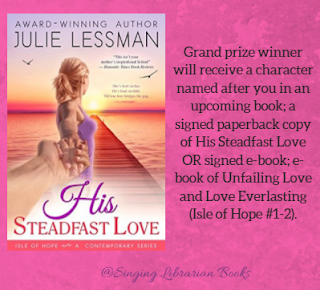