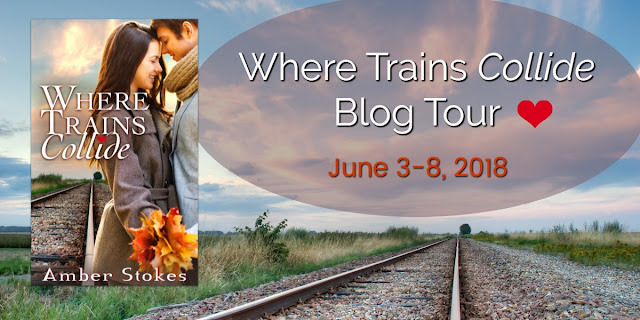 I am SO pleased to be a part of this blog tour! Especially for this particular story. It's been a long time in coming, but oh so worth the wait! I also have the privilege of sharing a deleted scene with my lovely readers as well. So without further ado, let's get to all the fun, shall we? :) 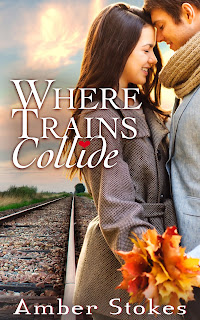 To say that I'd been anticipating this release would be putting it very mildly! And it was definitely worth waiting for. :) There is such sweetness in watching these two characters find each other again. It's not an easy journey for the two of them, but oh so wonderfully real!

It was Trisha I connected to immediately. You'd wonder how I, being an adult long beyond college age, could understand her fears and uncertainties, probably. But I do! Sometimes I wonder if we ever truly get life figured out because just when we think we have it, something gets thrown in to push us a bit off course. That's where Trisha is at the beginning of the novella. Uncertain who she even is at the moment and so full of this pull of something that she doesn't understand. It's a very insecure and precarious feeling! And so she throws caution to the wind and runs away for the weekend.

But then. Oh but then! When Paul enters the picture, I empathized with all the awkward she felt. And their initial conversations are a struggle. (Not due to bad writing! On the contrary, Ms. Stokes allows the reader to feel precisely what the characters are going through at these moments.) Yet as we watch the two continue to get pulled together, things begin to change. There's still fears and uncertainties there, yet slowly they begin to open up and be their true selves with one another. And that's when all the delight begins to happen!

The romance bits are, naturally, some of my favorites. ;) The shortness of their reconnection is enhanced by their past which is felt in all the unspoken moments between them. It's an undeniable connection that neither has ever let go of completely. And when they look at each other....ah my heart! There is so much there in the air between them and it kept me turning page after page to see where the next conversation would go!

All in all, this was a lovely way to spend a couple hours. If you're looking for a story that's short yet full of delightful romance that will make your heart smile, this one is perfect for you! So what are you waiting for? Go forth and buy it! :)

**I received a complimentary copy via the author. All opinions expressed are my own.

Burned out and disillusioned with her chosen career path, Trisha Knolane gives in to impulse and hops on a train bound for Oregon, eager to escape the stress of college for a few days. But what begins as a fun little adventure takes an unexpected turn when she discovers that her ex-boyfriend is also on board.

All her hopes and dreams had once centered on Paul Benson. Now, when Trisha doesn't know where her current track will lead, Paul’s reappearance in her life only complicates matters and sparks difficult questions.

Questions that could change the course of her life.

A heartfelt and thought-provoking contemporary romance novella, Where Trains Collide faces the uncertain season of new adulthood head on and shows that sometimes a path of broken dreams can lead to life’s best destination.

Purchase for $.99 on Amazon! | Add to Goodreads 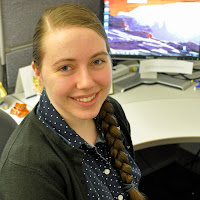 Amber Holcomb (Stokes) is an indie author and freelance editor living below the majestic mountains of Montana with her adventurous husband. Previously, she worked in marketing for a Christian publisher for nearly three years. Her passion for books compelled her to earn a bachelor’s degree in English and now fuels her work with words in this new season of life.

You can learn more about Amber’s books, sign up for her author newsletter, join the Amber’s Gems street team, and more at Seasons of a Story. 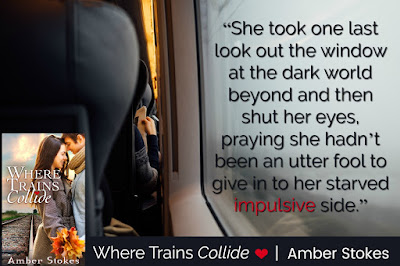 If you take a look at the Pinterest board for Where Trains Collide, you’ll see some pins featuring scenes from Silver Falls State Park. In the first draft of the story, Paul and Trisha headed north for an outing at the park. They end up going a different direction in the final version, but here’s a glimpse at that deleted scene…

It didn’t take them long at all to come to the edge of the ravine and catch their first glimpse of what had to be the South Falls, the main tourist attraction on this trail of falls. The invisible forces of nature shoved a ton of water off the edge of the cliff to their left, sending water droplets free-falling into a perfectly beautiful dive to meet the rest of the water pooled below.

Trisha’s cheeks hurt from smiling as she took in the view. She could feel the life here. The vibrancy shimmering in the damp air. The miracle of H2O moving and shivering and falling and keeping its form without ever having a shape.

She pulled out her iPhone and snapped picture after picture, until Paul nudged her with his arm. “Now who’s holding us up? You know, we can get closer.”

She eagerly followed after him, his red shirt like a beacon bringing her back to the path as she scanned the fall foliage and ever-greenery around them, pausing every so often to take more pictures.
Leaves beneath them. Sunlight like an arrow through the trees across the ravine. People crossing the cute wooden bridge below. All ended up on her phone. She couldn’t wait to share about this on her blog. Not that a million other nature buffs hadn’t already written about this place.

She was just getting ready to stop and pull out her new journal to jot down some thoughts, when they came to a curve in the trail that would lead them back around behind the waterfall. The dirt of the trail became a sludgy mud, likely from a combination of the waterfall and earlier rain.

But if that little five-year-old girl ahead of them could happily skip around it, well, it couldn’t be so bad.

Trisha gave up on the journal and turned her attention to skirting the bigger puddles. The pounding of the water became louder as they drew closer to the little cave-like portion of the trail behind the waterfall.

As she and Paul approached a particularly large puddle, a middle-aged man came at it from the other side. Paul stepped as close to the rail on their right as he could get. Trisha stalled for a moment, until he gripped her hand and pulled her up right next to him.

The man nodded in thanks as he passed in front of them, his arm brushing their sides as he shuffled around the worst of the mud. He had moved on several paces up the trail before Trisha realized that she and Paul hadn’t budged, even though the coast was clear.

And Paul hadn’t let go of her hand.

She didn’t know what to think of that. So she didn’t think. She just gave his arm a little push and let him guide them safely around the muck and under the rocky outcropping until they stood hand in hand directly behind the waterfall.

Mist hovered around them. A group laughed as they passed by, likely not as good as Paul at avoiding the puddles in the path. Trisha didn’t look back to confirm her suspicions. She couldn’t drink in enough of the view before them.

In the space between the safety of the ledge above and the depths of the pool beneath, the falling water grew thin and stretched in a living window. Gold autumn leaves glistened and glowed from the trees beyond. A treasure veiled from reach.

But somehow, she and Paul were better for simply knowing it was there. Knowing that such a sight existed from this impossible, enchanting angle.

His fingers tightened around hers.

Trisha blinked, and the waterfall changed from a solid, shimmery thing to a million different trails following gravity to their inevitable end. Unwitting water colliding with water that had been there before. 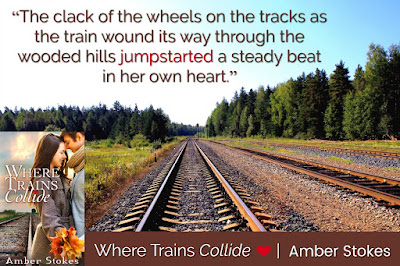 In celebration of this new novella, enter for a chance to win a $15 Amazon.com gift card! Giveaway is open internationally (to anyone age 18 or older who can receive an Amazon gift card via email). Void where prohibited.