Review: With You Always by Jody Hedlund 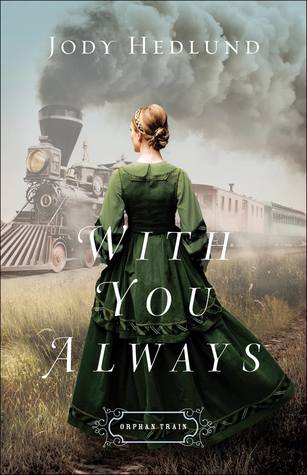 After thoroughly enjoying Jody Hedlund's An Uncertain Choice trilogy, as well as Newton and Polly, I knew I'd want to try more of her stories. And once again I was not disappointed! As a reader who used to devour historical novels but has become drawn to contemporaries more often of late, it takes an exceptional author to get me back in the genre again. Let me just say that Ms. Hedlund is definitely exceptional! :) The characters, the setting, it drew me in and left me with all the feels by the final pages.

I grew rather fond of Elise as her journey progressed. She's had such a rough life and I admired her strength to keep going in spite of everything. I cannot imagine the sheer determination required of those who lived back then, the squalor and painful, hard work that they endured every single day. Makes me glad to live in modern times, for sure! I loved watching Elise create this new little family around her once she arrives out west. Especially how her friendship with Fanny grows slowly, but surely.

And then there's Thornton! I admit to getting a little thrill every time his name was on the page, just because it reminded me of Elizabeth Gaskell's John Thornton. (swoon ;) This Thornton is fairly swoonworthy as well, he and Elise certainly have great chemistry! Yet I was glad that they were both given a nice dose of reality in the initial stages of their romance because they needed it. But never let it be said that I didn't enjoy their adorableness together! For all their differences, they truly did complement each other very nicely.

I was easily swept up into these characters lives and was more than happy to stay there as long as possible! I do have to say that the ending felt slightly abrupt to me though. I figure that's mostly for setup to get me interested in book two and it worked! So while it kind of bothered me, I can easily forgive it. And anticipate the months until the next book comes out! :)

**I received a complimentary copy via Bethany House. All opinions expressed are my own.

"Was that the way it was with God too? When she was hurting and crushed by the weight of heartache, was God there holding on to her hand, telling her He'd never let her go?"

"The only sound that rose in the night was the lonely whistle of the train preparing to leave. Without her."

"How about if we forget about eating sandwiches and just start with the pie?"

"She was stuck into unbreakable patterns in so many ways. So many people of her class were and had so little hope of change."