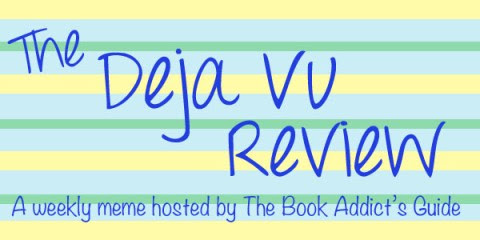 The Deja Vu Review is hosted every Sunday by Brittany at The Book Addict's Guide.  It's a chance to write a mini-review for books that you read in your pre-blogging days!

Today's topic is: A Fantasy

What better epic fantasy than The Queen's Thief series by Megan Whalen Turner? (I know it's more than one book, but I can't limit this to just one. The entire set is simply fabulous! Plus it's really just one long story anyway.) (As most series are, I suppose. But I digress.) I first heard about them from Angie last year, right around this time actually. Her post (and subsequent reviews) led me over to Chachic's Book Nook where she had a Queen's Thief Week going on. Go and read all the fabulous posts and then I dare you to decide that you won't read these books. It's not possible I tell you! They totally convinced me with all their gushing and so I trekked over to the library and found the whole series. I have to admit that I found The Thief just okay, and while it had an awesome ending, I wasn't blown away yet. So on to The Queen of Attolia. Frankly I was in shock that Ms. Turner could make me read a story with war and war strategies since a good portion dealt with that. Yet she had hooked me in by now, and while I still didn't think the books were fabulous, I was starting to notice details that were intriguing me. (In fact, I remember telling a friend that I was reading this well-written series but I couldn't imagine wanting to re-read them again.) (Silly me.) But then.........oh my goodness! Then I started The King of Attolia! Suddenly all these details from the first two books made a whole lot more sense, I had now fallen in love with Gen, Attolia, Eddis, the Magus, and the rest of the colorful characters, and by the time I finished it, I was feeling quite wind blown! :D A Conspiracy of Kings just solidified that feeling! I couldn't believe all these details that were showing up and things that had happened in the first books suddenly took on a whole new meaning completely. I was totally blown away and in love with these stories and dying to talk to to someone about them. So I now stand firmly in the camp of people gushing about this series and saying that you must read them! NOW! Then come back here and gush about them with me. ;) Seriously though, I encourage you to try them. They do seem kind of slow at first and you may think the way I did; that this isn't as fab as you expected and why should you want to finish. But I beg you just stick with it. Please read at least beyond the first book. Read one and two and then see if you don't want to go ahead and read three and four. It's worth it! :)

Just as a point of interest, Ms. Turner actually takes years to write these books. There's four years between the publishing dates of one and two, six years between two and three, and four more years between three and four. I believe more books are planned, but not out yet. The latest was published in 2010, so we've got a while yet for number five. So she has plenty of time to plan in detail and make sure we get another awesome addition. ;) But don't worry about cliffhangers and such! Each book ends at a point that you could stop and be quite satisfied, yet when you get the next story you realize how glad you are to be back in their lives again. Read it, read it, read it!

Well, that was considerably longer than "mini" wasn't it? Sorry about that. Guess I just needed to get my gushing out of my system! :D