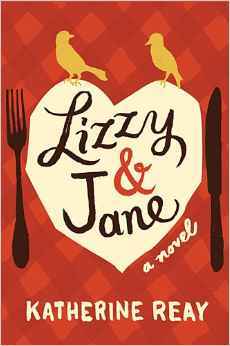 To say that I was excited to read this book would be a vast understatement. After devouring Dear Mr. Knightley last year, I knew beyond a shadow of a doubt that whatever Ms. Reay wrote next I would read. In fact, at only two books in, I'm thinking to place her on my list of authors I'll read no matter what! Because she is just that good. :)

There are lots of literary references, I'd never analyzed how food is used in literature, but Ms. Reay excellently points these out using Lizzy's love of books and food. (And the dishes Lizzy makes! I could almost taste some of them. :) I loved the references to Jane Austen, but there are many more to be found hidden in these pages. It's like a literary feast for all the senses! It's quite obvious that Ms. Reay is a reader and knows her classics very well. She incorporates these stories into her story until they permeate the entire book, even when not mentioned!

This is not the type of story to throw you from one twist to another with loads of action. Instead, it's the quiet moments that shine. Like when Lizzy accompanies Jane to her chemo appointments. (The other patients and families that they interact with only there, yet I could picture that they were busy living their lives even while not appearing on the page.) Lizzy's conversations with Nick and Matt. Danny and Kate learning how to adjust to their mother being sick and finding their new "normal". Lizzy and Jane's dad, who is simply wonderful. Peter figuring out how to handle his wife's sickness and all the daily changes that comes with that. Lizzy and Jane themselves. Tiptoeing around one another, yet unable to deny the love they have for each other, even while sniping and criticizing.

This story is breathtaking. While it may be quieter, it still packs a punch! And that ending! Ah, such a wonderful ending. Ms. Reay uses a softer touch with the romance, but that just makes each moment so much sweeter. And the ending references one of my absolute favorite moments in literature! (Hint: It involves a letter.) Most definitely swoonworthy! I confess to rereading the last couple of chapters several times. ;)

*Many, many thanks to Katherine Reay for providing me with an ARC in response to my enthusiasm via twitter. :)

"...I never forget a food reference."
"Never?"
I shrugged. "It's a gift."
"Sixteen Candles?"
"The cake, of course. Oh, but there's that quiche dinner too. See? Sixteen Candles and Dickens--all about breakfast."
"Under the Tuscan Sun?"
"Never read it, but I'm assuming a ton of Italian?"
"That was obvious." Cecilia smiled. "What's your favorite food reference?"
"I've got two. I think the best opening line in literature is Peter Mayle's A Year in Provence. 'The year began with lunch.' All books and all years should begin that way."