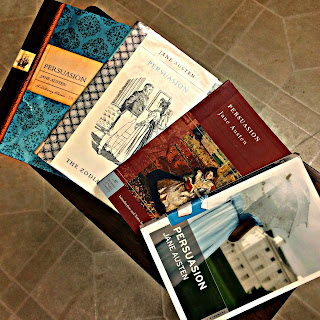 {Yes, as I'm still reading through this story, it's still on my mind. So I'm still going to gush about it some more! Sorry not sorry.}

For me, watching Persuasion adaptations is like owning four copies of the book itself. :) I'm pretty sure I've seen all the versions out there, of which there are only three that I know of, 1971, 1995, and 2007. (Interestingly, when I went to look this up officially, I found this website which states that The Lake House movie also references this story. I haven't watched that one in an age, but I do recall that the book is mentioned.)

Anyway! I love any and all versions of this story, simply because I love this story to bits! (As if you didn't know, right?) I like the '95 version for how it sticks so closely to the book. I like the '07 version for the actors and the overall feel and flow of the story. As for the '71 version, as I recall it's rather dry and dull and I don't remember liking it nearly as much as the newer ones. It has been several years since I've even seen it, however, and I don't own it, so....

Last Tuesday, Amber, Courtney, Julie, and I twitter-watched the '95 version together. And as we talked about what we liked and didn't like about it, it made me think of the '07 version (which I promptly pulled out once our twitter-watch was over) and have been pondering which actors/actresses I liked the best and the least. Which leads me to the point of this post! I'm no good at trying to pick out new people to play the roles (although I am still waiting for the perfect harmony of an adaptation which has the right actors, and all the scenes where they're supposed to be, and flows nicely), so I thought I'd just choose which actors from the current adaptations I like the best.

And you are welcome to disagree with my choices! I promise I don't mind if you do. Although I wouldn't mind knowing why, if you care to share. Because it's always fun to chat about Persuasion! Let's get to it, shall we? :)

Truthfully, I can't really decide between these two. I appreciate Amanda's Anne for how we can actually see her "bloom" and her interactions with Wentworth do feel charged with all she's feeling, but not saying. Yet Sally's Anne has some wonderful facial expressions also! And her chemistry with Rupert was very good. Especially in the scene where Wentworth comes to ask if Anne is going to marry Mr. Elliot. (Okay, so he doesn't actually ask that question, but he's definitely thinking it! ;)


Rupert wins, hands down! Ciaran does a wonderful job, but Rupert is simply much more handsome. In my opinion! :) His "bursts of feeling" seem real and as I said above, I liked his chemistry with Sally. Plus he's just so nice to look at! A shallow reason to be sure, but there you go.

Sir Walter Elliot
﻿
He's hilarious and ridiculous as Sir Walter! Plus did you notice his outfit in that picture? I mean seriously! Only Sir Walter would think such fabric was the thing to wear. :D 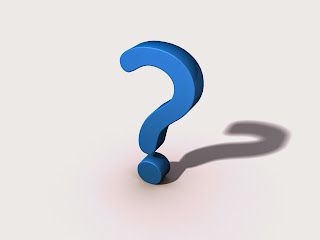 To be truthful, I don't really like either actress from either adaptation. So I decided I wasn't going to force myself to choose one.


She's annoying, yes. But much less annoying than the other one. I can laugh at Sophie's Mary, while I just get frustrated with Julia Davis' Mary.


I can feel the friendship and caring that he feels for Anne. And I just overall like his acting better, maybe? I don't know. He feels more jolly, I think.


Susan's Lady Russell exudes haughtiness, just as I picture she would. Plus the hats and outfits she wears! The costume people had fun with her, I imagine. :D


They just act as jovial and fun as I picture the Crofts are. Constantly smiling and overall awesome! Their Crofts are the ones I'd love to meet in real life. :)

Louisa & Henrietta Musgrove
They seem slightly less annoying, maybe? I'm not sure I can really pick which Musgrove girls I like the best. But I'm going with these two. Maybe because I just have a soft spot for Victoria.


Yeah, so I couldn't really choose among them. I like them all for different reasons! :)
William Elliot
I chose Tobias because I like his hair better. :D But both actors make Mr. Elliot appropriately creepy and annoying. 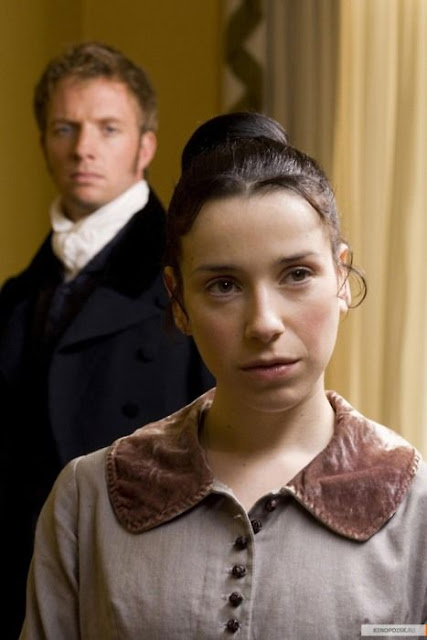 And I'm posting this picture again just because it's pretty and I wanted to end with a nice picture, not one of Mr. Elliot. :D
So who would you choose? Do you have a perfect cast in mind?