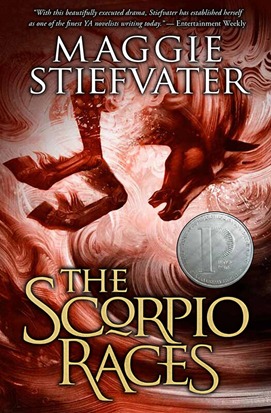 This book, y'all. It's been months since I first read it and I still find it hard to put all my feelings into words! I've had it sitting on my kindle for several years and for some idiotic reason, I never got around to reading it in full until this year. I found the audiobook at my library and decided maybe that was what I needed to get me started. I was SO right because this story completely blew me away! All the hype and the rave reviews? All the things every blogger/reviewer has said about Ms. Steifvater and this book? I am now a believer, my friends. Seriously, you need to read this one! It's unlike any other book I've ever read before. How? I shall attempt to try and explain...

First of all, the world building is fabulous! It took me a bit to settle into the story, but it wasn't long before I could feel the wind on my face, hear the ocean waves crashing to shore, and feel the restless energy of the entire island of Thisby. The whole book feels vividly atmospheric and interestingly vague. I say that because we're never quite certain exactly where and when this story takes place, but it doesn't matter because everything feels so timeless. Although there's electricity and cars, which rules out a historical time period, at the same time it doesn't feel modern either. And while the water horses (capaill uisce) have a fantasy genre feel, the rest of the novel is very real and relatable. I applaud Ms. Stiefvater's ability to bring such a mix of things into one amazing story.

Then there's the characters, especially Puck and Sean. I've not read a great deal of stories with multiple narrators and some writers definitely excel at it while others are so-so. This one is in the exceptional category! I should point out, however, that I think it helped that I listened to the audio in which the two narrators reading it were incredibly skilled at accents. Hearing their separate voices for each point of view worked really well and drew me into the story much more than my attempts at reading the e-book had. Likewise, all the side characters are just as fascinating! From Puck's brothers Finn and Gabe, to the horrible Malverns, intriguing George Holly, feisty Dory Maud and her sisters, and even the water horses themselves-who are "magical and terrifying", most especially Corr. There are some characters who are easy to label as a good guy or a bad guy, but most of them vary between the two. I was constantly trying to decide what they would do next and always having to rethink my ideas of them. It made them very compelling. :)

The majority of the book is a build-up to race day and as the tension rose and the stakes kept getting higher, it made me want to skim forward faster. But the beauty of this story is experiencing all the uneasiness and agitation right along with Puck and Sean. There's no great and huge action moments, either. Neither Puck nor Sean are talkative people, but as you spend more and more time in their heads, you realize it's the subtle moments that have the biggest impact on you as the reader and on the characters themselves. The complex details don't show themselves right out in the open; they build and build, quietly appear on the horizon, and all of sudden there they are right in front of you! Much like the water horses themselves, they make their presence known boldly and noiselessly.

This is a book that needs to be experienced without much knowledge of what precisely is going to happen. It's all the little moments strung together that creates the climb to the climax and then that perfect ending! It's a beautifully written story that is never leaving my library because I am positive there will be many a re-read/re-listen in my future! Highly, highly recommend!

And then I see that Kendrick, too, has seen me, and is uncertain about getting into the truck, and that pleases me. I would like to be terrifying. I glower at him.
But Gratton's expression must counteract mine, because Sean Kendrick glances back the way he's come and then starts around to the other side of the truck. My side. Gratton opens his door and tells the dog to get in the back, which she does, shooting us all a filthy look. I move into the seat she'd been occupying--now that I'm sitting right next to Gratton, he smells like the lemon throat lozenges whose wrappers are scattered on the floor. All the while, I'm madly trying to come up with something catchy to say when Sean opens the passengerside door, something that will at once indicate that I remember what he said to me on the beach and also carry that I am not impressed or intimidated, and possibly convey the message that I'm more clever than he thinks, as well.
Sean Kendrick opens the door.
He looks at me.
I look at him.
This close, he's almost too severe to be handsome: sharp-edged cheekbones and razor-edged nose and dark eyebrows. His hands are bruised and torn from his time with the capaill uisce. Like the fishermen on the island, his eyes are permanently narrowed against the sun and the sea. He looks like a wild animal. Not a friendly one.
I don't say anything.