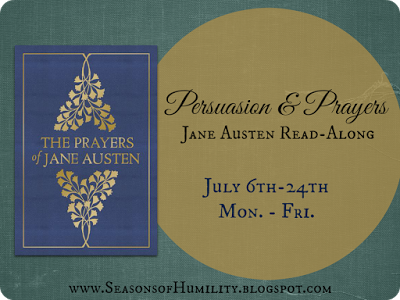 Well goodness, there's a great lot of stuff that we find out in these next chapters! Things are finally coming to a head and I find it so interesting that after much of the book has been spent quietly moving from scene to scene, all of a sudden Ms. Austen must have realized her story was reaching the climax and she had all this info her readers needed yet. Because we do get a bit of an info dump, especially in chapter 21. I'm not complaining, mind you! I just find it intriguing how Ms. Austen plotted this novel. :)

{More discussion is over here, at Amber's blog.}

"How she might have felt had there been no Captain Wentworth in the case, was not worth enquiry; for there was a Captain Wentworth; and be the conclusion of the present suspense good or bad, her affection would be his for ever."

{I love that! Anne determines to love him no matter what. It reminds me of Mr. Thornton from Elizabeth Gaskell's North and South actually, because he does the very same. No matter what the object of their affections do or do not feel towards them, whether they end up happy in love or no, both Thornton and Anne decide to love anyway. And at the moments when they determine this, neither of them have any guarantee of a happy ever after. Which just shows their bravery! Dear, brave, Anne, just you wait. Your happy ending is coming! :D }

I am SO glad we finally know how very despicable Mr. Elliot is! And I love that, while Anne suspected his duplicity, she never guessed the extent of his awfulness. Her goodness and honesty wouldn't think such things. At least not without proof and irrefutability, such as Mrs. Smith gives. I do feel bad for Anne as well. Because she knows these things now, but is unable to tell her family as they would never believe her! For as terrible as they are to her, she still loves them and would never want them hurt. It's quite a quandary she's in.

Yay for the return of the Musgrove's! They give Anne happy moments with friends which is like a breath of fresh air for her. Plus they allow great opportunity for Anne and Wentworth to spend more time together! Which just makes me happy. :D How cute is it when Wentworth slyly takes the opportunity to chat with Anne and let her know how much he remembers about her? And Anne gets so frustrated when she's forced to mention Mr. Elliot. These two. So thwarted and jealous and in love! ;) 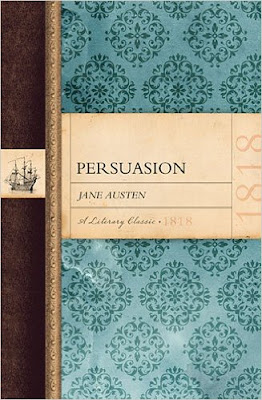 Question :: If you were in Mrs. Smith's position, what would you have done? That is to say, if you knew some pretty awful things about the person your friend might be marrying, would you stay silent in hopes that things would work out all right, or would you tell your friend what you know, even if it could alter her future/relationship? (Would it make a difference to your response if you were living in Austen's time instead of today?)

Mrs. Smith loses a bit of my respect in chapter 21 because her reasoning frustrates me! Yes, it's very realistic that she's been letting her selfish side rule when it comes to the information she's been withholding from Anne, but that doesn't mean I have to like it. Or that I have to be as understanding as Anne is. Because Mrs. Smith and Anne are good friends! By this time, they have spent considerable amounts of time together and she knows what kind of person Anne is, she knows her heart. As such, that gives Mrs. Smith great responsibility. True friendship means saying the hard stuff, even if you know it will hurt. (Though it should always be said with love.) Especially if your friend may be thinking to marry someone like Mr. Elliot! After how many years Mrs. Smith has known Mr. Elliot, has known his true character, to then say that she couldn't decide whether to tell Anne because she thought Anne could (basically) change him? That makes no sense to me. As Amber said, her reasoning is extremely flimsy.

So no, I would not stay silent. Marriage is a huge step, you're choosing to be with this person for the rest of your life. Why would I want to potentially subject a dear friend to a lifetime of misery if I had the chance to let them know what their husband-to-be has done? Now of course, I do realize that they would still have the chance to decide for themselves, I couldn't actually keep them from marrying that person. But at least I would know they were going into the marriage with their eyes open. As their friend, I think that's my responsibility. Otherwise, how can you call it a true friendship? Part of loving someone is wanting their happiness more than your own. Even if it changed our friendship, I still think it's my responsibility to be honest and in the end, my conscience would be clear. How horrible would you feel to watch a close friend suffer, knowing you could have done something to prevent it and didn't? I don't even want to imagine such a feeling.