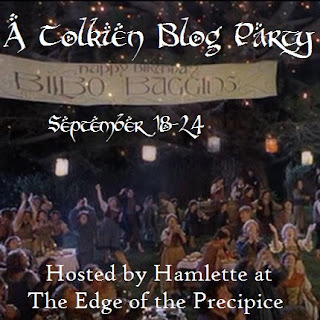 I mentioned that this was happening soon and here it is! Yay! :) Also, I found out from Hamlette's post that today is Frodo and Bilbo's birthday. Clearly I'm still a newbie Tolkien fan, huh? But anyway! Cool news and all. Happy birthday, Bilbo and Frodo! :)

Let's get to the fun! {Check out the giveaway Hamlette has going on as well.}

How many books by J.R.R. Tolkien have you read?

I've read four of Tolkien's books: The Hobbit, The Fellowship of the Ring, The Two Towers, and The Return of the King.

Have you seen any movies based on them?

Yes! I've seen The Lord of the Rings trilogy. I loved them so much that I decided I wanted to read the books....then I actually looked at the books. And quickly gave up, deciding that I wouldn't be able to understand them. But yay for Hamlette and Jamie gushing over the stories to the point that I was convinced to try them again! :)

Are there any scenes/moments that make you cry?

Hmmm...I know I was sad several times, but I didn't actually cry at any point in the books. The movies on the other hand...I'm pretty sure I got teary-eyed at the end of Return of the King, especially when Sam realizes Frodo isn't going back home with him and they have to say goodbye. That bit for definite! *sniff*

Are there any scenes/moments that make you laugh?

I love all the competition between Gimli and Legolas! Their friendship is the sweetest and they constantly make me laugh. Both in the books and in the movies!

Have you ever chosen a Middle Earth name for yourself? If so, what is it?

Who would you want to party with/marry/fight to the death? (pick three characters)

I'd party with the Hobbits! So long as I was promised we wouldn't get in trouble. (Although it's pretty much guaranteed we would, isn't it? ;)

And who would I fight to the death? Denethor because I did NOT like that man.

When was the last time you visited Middle Earth, via books or movies?

October/November 2015 when I was reading the trilogy for the first time. Or listening to it more like.

Do you consider Gollum to be a villain? Why or why not?

I think he's certainly portrayed as one. Especially in the beginning! But I also think Tolkien gave enough of his backstory for us to realize that while Gollum had villain tendencies, it's really the ring that amplified those and made him worse. So basically, Tolkien sets him up as a villain, but that's not where he leaves him.

How would you sum up what Tolkien's stories mean to you in one word?

Hope! In spite of all the bad, so many of my favorite characters never gave up on hope. Good will win! I think that's why the stories captivated me so. Well, that and all the awesome characters, of course! :)

List up to ten of your favorite lines/quotes from the books or movies.

(So I will be honest and say that I had to look up quotes from the books in order to find these. Except for the first one, because it's already on the wall by my door at home. But as I listened to the audiobooks, I had no quotes saved anywhere sadly. Thank goodness for goodreads!) (Also it's been ages since I watched the movies, so my memory is quite faulty.)

- "It's a dangerous business, Frodo, going out your door. You step onto the road, and if you don't keep your feet, there's no knowing where you might be swept off to."

- "May it be a light to you in dark places, when all other lights go out."

- "In a hole in the ground there lived a hobbit. Not a nasty, dirty, wet hole, filled with the ends of worms and an oozy smell, nor yet a dry, bare, sandy hole with nothing in it to sit down on or to eat: it was a hobbit-hole, and that means comfort."

- "His grief he will not forget; but it will not darken his heart, it will teach him wisdom."