Review: A Lesson in Love and Murder by Rachel McMillan 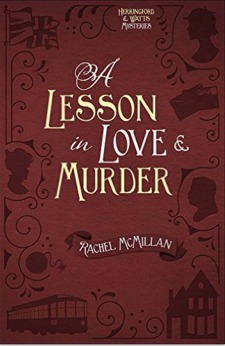 Such fun! Once again, Ms. McMillan has taken me on an adventure right from page one and kept me fully invested in these characters lives. Y'all know how characters make or break a story for me, and this entire cast are some of the most frustrating yet charming! I love the friendships, the romances, all the relationships between them. They're quirky, and sometimes make terrible decisions, but isn't that true of real life? And I love how they care for one another, Jem and Merinda especially. Their interactions and how they always tend to go flailing into danger keep me turning the pages. Their friendship is my favorite! I really enjoy seeing them do whatever it takes for each other. In book one, it felt like most of that was being done by Jem, I was so pleased to see Merinda step up a little more in this one. (Only, with that ending now I'm terribly worried what's going to happen in book three. *bites nails*)

Jem and Merinda are a delight together, as always. But I have to admit, Benny is a really nice addition to this circle of friends. Mounties can be awfully swoony! (Clearly Merinda thinks so. I had to laugh at her awkwardness around him! ;) But poor Jasper, I wanted to hug him a few times. I surely do love that man. (Book three better give him some happiness, is all I'm saying!) I really enjoyed getting to spend more time in his head this go round. He has to balance his friendships and how much he wants to truly help people with the trickiness of keeping those he works under happy. Especially since there's obviously stuff going on with the higher ups at his job. It's not easy and when the woman he loves starts falling for someone else? Well.... (Although I was glad to see that she's realizing her heart is capable of that. Hopefully that bodes well for Jasper in book three...? Here's hoping!)

Ah, my poor Ray-and-Jem-loving heart! Those two....if only I could have knocked their heads together in a few instances! Communication is not nearly as hard as they make it. Their relationship is sorely tested, much to my sadness. Yet as their romance happened so quickly in book one, it only makes sense that there would still be things they're learning about each other. Likewise for the other relationships. We get to know all of the characters much more in this book, as they get to truly understand one another. Things don't always go as they plan (naturally), but this is just the sort of things I was looking forward to, prior to reading this. Perfect happiness isn't possible, life takes hard work just as the characters find out. And I actually really love that things happen at a pretty quick pace. Since it's a series, we have three books (plus novellas) to see these characters grow and change, which gives us time to enjoy the mysteries they're all trying to solve, as well as the romances. All the details don't have to be explained, the characters are able to just be themselves and we don't get bogged down with any slow chapters. Yay! :)

The mystery is suitably intriguing and dangerous, but I have to be honest. I'm not here for the mystery, I'm here for the characters. More Jem and Merinda please!

"You're a woman!"
Merinda Herringford's eyes were magnetic. He kept hold of her hand as she studied him. She didn't immediately pull away, but looked intently at him. "This is my colleague and particular friend, Jemina DeLuca."
"A-and where's Watts?" Benny asked, looking at the newspaper clipping.
"Oh, that's me!" the brunette said in a light voice. "At least, it was. I'm married now."
"But your advertisement..."
"Yes! No problem too great or small!" Merinda said.
"Herringford and Watts. Detectives. But you're women!" he said again.
"Perceptive. We're also detectives." She narrowed her eyes. "Come, have a seat and tell us what brought you so far from the Force."
Benny gaped. "How did you know?"
"Your hair. It's cut with military precision, but there's a decided line running at the back of it, embedded just behind the ear line. Clearly not from one of the berets worn by soldiers. Rather, a stetson. Of course, you could be a cowboy, but then you wouldn't stand with your feet just slightly apart and your hands behind your back."
"A Mountie!" breathed Mrs. DeLuca, blue eyes aglow.
Benny was visibly impressed. Perhaps this lady detective would be the solution he was looking for. "Benfield Citrone, Royal Northwest Mounted Police, late of Ford Glenbow. I'm here because my cousin knows how to blow things up."