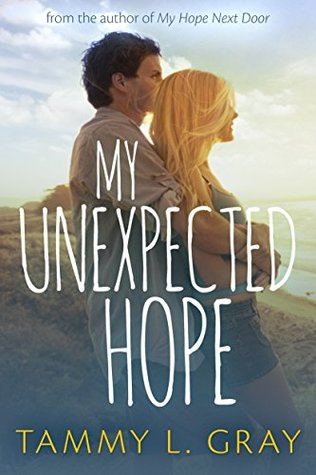 This is not an easy story to read, but oh so worth it! Because Laila and Chad's journey is fraught with pain and hurt. And lots of it. Much like their best friend Katie's story (My Hope Next Door, which I loved!), they've both made a few (or several) wrong choices and the consequences are gut-wrenching for them. But these two characters could not be in more capable hands than Ms. Gray's because she excels in filling characters' difficult trajectories with bits of hope. So don't let the fear of hard scare you away!

I admit to not quite being sure I liked Laila in book one, but I was intrigued by her. She's one tough cookie, this lady! :) Watching as she struggles to figure out how lovable she truly is and to be able to forgive herself, as well as Chad, is a beautiful redemption. It's a hard road to get there, but once she arrives...ah my heart! It broke so many times during this story, but by the final pages it was mended whole again. And Chad. So many times I wanted to shake him! But as he grew stronger in his faith walk, so, too, did my appreciation for him. Neither he nor Laila have it easy, but they refused to give in completely and became wonderful examples of hope!

The title of the book truly describes what happens during the story. For all the hard and yucky things these characters have to endure, their friends, and ultimately their Father above, refuse to let them surrender! And hope is reborn again and again, much like our real lives. That's what I love most about Ms. Gray's stories, I think. The rawness of the emotions felt, the very real heartbreak that exists and is so easily related to. The layers upon layers in the characters, who never seem to fit into just one box of personality, precisely how we human beings are. We're complicated! And her characters show it. She writes about serious things, things we've either experienced or possibly know someone who has. She takes her readers to difficult places, yet never lets us forget that love never gives up. That grace and mercy and forgiveness are actually possible, no matter how impossible they may seem!

And she ends it all with hope of the good yet to come in the characters lives long after the final pages are closed. The reader only has to trust where she intends the journey to go. And it's worth it, friends. Believe me. :)

**I received a complimentary copy from the author via Netgalley. All opinions expressed are my own.

You can try and fight, and maybe even sometimes succeed, but without faith, you cannot call it freedom. It's simply bondage on hold.

Grief so crippling that on days like today, she began to doubt whether she'd ever truly be whole again.

She wanted from him the same thing he expected from Laila. Forgiveness. Something so simple, yet so impossibly hard.

She'd been fighting all this time to stay in control. But maybe that was the problem. Maybe it was time to give all of herself to a God who had never rejected or abandoned her.