Hello, my lovelies! It's been a few weeks since I joined in the fun on Fridays over at Hoarding Books, but as I'm currently in the middle of a read-along of Anne of Green Gables, I knew this would be a good week to participate again! Because that first line by Ms. Montgomery? Is just awesome! :D (Just you wait, you'll see!)


Without further ado....Anne of Green Gables by L.M. Montgomery! 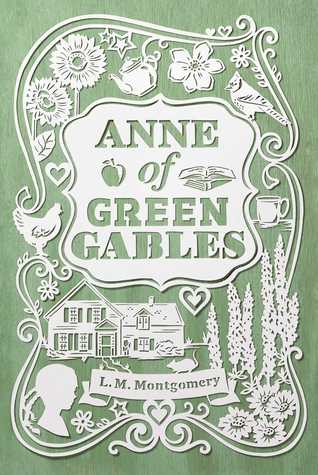 Mrs. Rachel Lynde lived just where the Avonlea main road dipped down into a little hollow, fringed with alders and ladies' eardrops and traversed by a brook that had its source away back in the woods of the old Cuthbert place; it was reputed to be an intricate, headlong brook in its earlier course through those woods, with dark secrets of pool and cascade; but by the time it reached Lynde's Hollow it was a quiet, well-conducted little stream, for not even a brook could run past Mrs. Rachel Lynde's door without due regard for decency and decorum; it probably was conscious that Mrs. Rachel was sitting at her window, keeping a sharp eye on every thing that passed, from brooks and children up, and that if she noticed anything odd or out of place she would never rest until she had ferreted out the whys and wherefores thereof.


Wow! Is that not the longest and best "run-on sentence" that you've seen?? :D It perfectly sets the tone for this story! You cannot read that and think that this book is going to be boring and dull. It's simply not possible! I've read this story before, but it's been years ago and so had forgotten how purely delightful it is. But I read that first sentence and I just knew. There's a reason why I love Anne so much. Why I remember loving this series of books so much. Ms. Montgomery created a cast of characters that are simply awesome and her vivid descriptions of everything make me think that she must clearly have had an incredible imagination herself!

If you've never read this book, then I highly recommend that you do! It's so worth it to meet Anne. Trust me, it really, really is. :)

What are you reading this weekend? What is your first line?
Open the book nearest you and post the first line in the comments below…
Or just click over here to join in with everyone else!