It is in vain to say human beings ought to be satisfied with tranquility: they must have action; and they will make it if they cannot find it. ~ Charlotte Bronte


Wow, you're thinking. That's a lot of authors to cover in one single post! You're completely right. But if it makes you feel better, I'm only going to talk about one story per author. And only a few thoughts for each one. So on with discussion!

Remember back when this show first started and I posted my thoughts on the first episode? Of course you don't. Here's a refresher. Anyway, I've been faithfully watching every week. Also reading stuff written by the creators because the Thursday episode's kept confusing me. I have now figured out that we have only one episode of plot per week (on Monday's) and Thursday's video is devoted to fan service basically. Clara has posted a few recipe video's on Thursday's, but the main storyline happens on Monday's. I've read very mixed reactions to the series so far and to be honest, I've not always been 100% clear on how I felt about it myself. But I'm pretty much behind it now. And that's all due to this cute duo below!

That would be Clara and Ed. I loved Clara immediately upon meeting her. Ed, I wasn't so sure about. But he's grown on me and now this week (as in yesterday), I've decided he's adorably dorky and I'm totally rooting for him! So I'm really, really hoping he stays that way. I want to like him for always! He and Clara have great chemistry and...well........if you read my blog very often, you know already that I'm a sucker for a cute romance. These two have all the makings of that happening. And quickly too! Because it's only a short series and doesn't have many episodes. Who knows what will happen though? Since Austen's original story is unfinished and the writers of the series have really branched off from the book, there's no telling where we'll end up. But I really want Clara and Ed to end up together! Just sayin'. :D  Here's more info if you're interested. And here's the newest episode.

I know I'm not the only one who has felt bereft since The Lizzie Bennet Diaries went off air. :( But I've discovered another video diary along a similar vein. The Autobiography of Jane Eyre is (obviously) based on Jane Eyre. I had better state right up front that I tried reading the book and couldn't finish it. (It just wasn't working for me. Maybe someday I'll try it again, who knows?) So based on that, I was kind of hesitant to start this. But I have seen a couple of adaptations (there are so many to choose from!) and didn't mind them, so I thought why not. It never hurts to try it once! You guys, it really is pretty cute. But vastly different in tone from The LBD just to warn you. (Which it has to be because the books are vastly different themselves.)

That would happen to be the torso's of Jane and Rochester. Why yes, we're only on episode 11 and we've just met Rochester! (Phooey on that 60 episode business. ;) But only his torso, legs, and feet so far, no go on his face. As I said, it's pretty cute. And it's only begun, so if you want to get in on the story from the beginning now's your chance! Since there's only 11 episodes, you should at least try it, right? :D The first episode is here, but beware that there's no people in it. Jane doesn't show up until episode 2.

So I finally watched this mini-series a few weeks ago! Whoa. Dickens doesn't mess around, does he? I've seen Little Dorrit and Our Mutual Friend, so I kind of knew what to expect of his stories. But still, I don't know how he wrote such intricate details with such a huge array of characters! I'm in amazement at his ability to throw out all these seemingly disconnected characters (there's a large number of them!) and then slowly start weaving them all together. That was certainly something he excelled at! He also never shied away from showing the gritty and dark side to life back then. 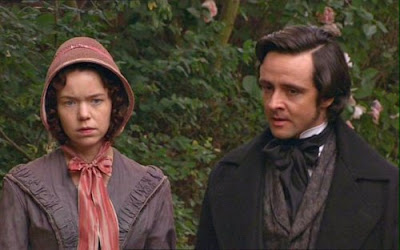 I admit it. The one reason I was finally convinced to watch this was because of these two people. Esther Summerson and Dr. Allan Woodcourt were so sweet! Their love story was wonderful. Their characters were wonderful! Especially Esther. I can't imagine watching this and not loving her and wishing only good things would happen to her. She is a remarkable character and absolutely my favorite. I loved watching Dr. Woodcourt watch her. He was so adorably obvious! Sigh. Okay, I'll be quiet now.

Anyway, I did enjoy the series. Very glad I watched it. I started it with a friend on a Sunday afternoon, and had to keep watching way past my bedtime because I had to finish it! I had to know what was going to happen! Mr. Dickens is also really good at the suspense. Or perhaps that's the skill of the screenwriters. Either way, this was an enjoyable series. :)