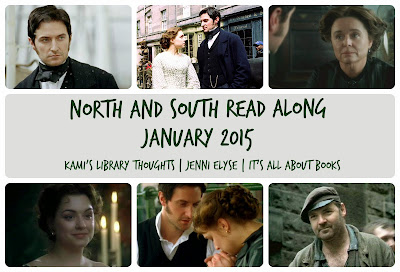 It's time for part 2! We are now 2/3 of the way through the book and oh my, lots of stuff happening. Riots and deaths and hidden brothers and all kinds of shenanigans going on.


Have your feelings changed towards Mr. Thornton during this section of the book?

Not really. I do feel a bit sorry for him. Such feelings he has! I love being privy to his thoughts and how he decides to love Margaret no matter what she or anybody else may think. His constancy is definitely to be admired.

Have your feelings towards Margaret changed?

Again, I'd go with not really. Because I do like her, in spite of her snobbishness. Which comes even more into play in this portion of the story. She's quite intelligent, even if she does make some pretty poor choices sometimes.

What do you think about the riot and how Margaret and Mr. Thornton reacted?

Mr. Thornton was a little too susceptible to Margaret's anger/frustration/whatever it was, which led him to doing what she said. And while their actions ended up causing the strike to end, I don't think it was really that smart. Margaret really has much to learn about people, especially upset and angry crowds of people. Although she had some good food for thought for Mr. Thornton, I'm not convinced it was the right thing to do, to send him out there alone. (But I do admit the reactions from Mr. Thornton when he sees Margaret hurt is awful sweet! ;)

Do you think Boucher's anger and actions were justified?

I'm not sure it was justified, but I could sympathize with him. I can't imagine having to watch my children starving to death right in front of me. And I can definitely see where that would cause someone to make some hard/bad choices. I just felt sorry for him more than anything.

Did Bessy's or Mrs. Hale's deaths effect you in any way?

Even though we'd been expecting both, I did feel sorrow. Especially when Bessy almost died all alone! I'm so glad Mary was able to be there for the final moments. I think I was more affected by Bessy than Mrs. Hale, I admit. Somehow I just felt more of a connection to her. But I did feel sorry for Mr. Hale and Margaret and Frederick, they all hurt quite a lot.

Were you surprised to learn that it wasn't common for women to attend funerals? What are your feelings on that tidbit?

No, because I've read/watched other stories and knew about that particular tradition. I'm glad it's not still that way today, because I think there can be something mysteriously comforting in getting to say that final goodbye at the funeral.

Now that we've met Frederick, do you like him? Are you sympathetic to his predicament?

I do. I feel for him. Whether he made all the right choices, I can definitely tell that he misses his family very much and they him. That has to be really hard.

What are your feelings on Mr. Thornton's proposal?

Aw. Poor Mr. Thornton! Margaret was quite nasty to him in that scene. I felt that's when her snobbishness really came out and I felt terrible for him at that moment. He was only trying to do that right thing and even if she couldn't accept him, she could have said no in a much nicer and gentler way. Wish I could jump in the book and give him a hug. Or even say yes! I'd definitely say yes to Mr. Thornton! ;)

If you were in Mr. Thornton's place, having seen the person you love with a stranger late at night, then finding out that person was questioned by the police and lied, would you do the same thing Mr. Thornton did? Would you protect that person even though you think they have done questionable things?

I have no idea. But I can swoon over Mr. Thornton doing so! He really loves Margaret so very much. And it's never so apparent as when he makes this decision and saves her. Which leads me to this next question...

Do you think Margaret's feelings towards Mr. Thornton have changed? Why?

I think she starts to think a little differently about him once he saves her. She's still got quite a bit of realizing how amazing and wonderful he is to go yet, but I think this moment is her turning point in her mind. When she stops trying to find fault in every single thing he does or says. Now if only she'd hurry up and see how awesome he is so we readers can enjoy them together! *sigh* ;)


Tune in for part 3 in a couple weeks!