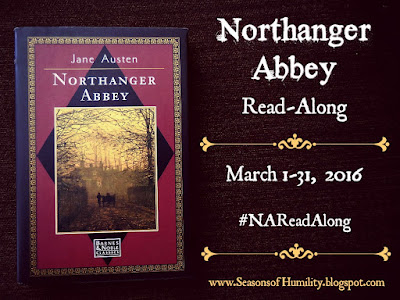 Here we are again! Finally I am caught up with the timeline of this read-along and get to answer the questions on Thursday even. Who'd a'thunk it? :) So. Things pick up a little bit in this section and the more I read, the more I'm really liking this story. It's different than Austen's other books, that is the others of hers that I've read. The narrator continues to make me laugh with all the little asides and anecdotes she adds in. And I'm simply enjoying the lighthearted feel of the entire thing!

Now on with discussion. {Click over here for all the details on this awesome read-along. AND! There's a giveaway going on, so be sure to check it out!}

"Such is the common cant. "And what are you reading, Miss-?" "Oh! It is only a novel!" replies the young lady, while she lays down her book with affected indifference, or momentary shame. "It is only Cecilia, or Camilla, or Belinda;" or, in short, only some work in which the greatest powers of the mind are displayed, in which the most thorough knowledge of human nature, the happiest delineation of its varieties, the liveliest effusions of wit and humour, are conveyed to the world in the best-chosen language."

"James and Isabella led the way; and so well satisfied was the latter with her lot, so contentedly was she endeavouring to ensure a pleasant walk to him who brought the double recommendation of being her brother's friend, and her friend's brother, so pure and uncoquettish were her feelings, that, though they overtook and passed the two offending young men in Milsom Street, she was so far from seeking to attract their notice, that she looked back at them only three times."

"For though she could not, dared not, expect that Mr. Tilney should ask her a third time to dance, her wishes, hopes, and plans all centred in nothing less. Every young lady may feel for my heroine in this critical moment, for every young lady has at some time or other known the same agitation. All have been, or at least all have believed themselves to be, in danger from the pursuit of someone whom they wished to avoid; and all have been anxious for the attentions of someone whom they wished to please."

Ah, poor Catherine. I loved how Amber described it: I would say chapters 4 through 9 can be summed up in one word: thwarted. So true! She is thwarted at every turn and every time she thinks a certain thing will be enjoyable and help her feel better, well...she ends up disappointed. I have to hand it to her though, she doesn't give up hoping for things to go her way next time! I think that may be one of my favorite things about her actually. She's so very innocent and doesn't have a clue of 90% of the subtext going on about her (the girl is hopelessly clueless at how she wears her heart on her sleeve! I thought that moment where she totally tells Miss Tilney that she's interested in her brother without ever saying the words and doesn't even realize that she's done so is adorably naive!), but she never gives up hope! Hope is a wonderful thing to have. Her innocence is sweet, though I'm not certain how much of a conversationalist she is. However, she does keep up with Mr. Tilney pretty well in that dance convo in chapter 10, so she's not an idiot by any means! 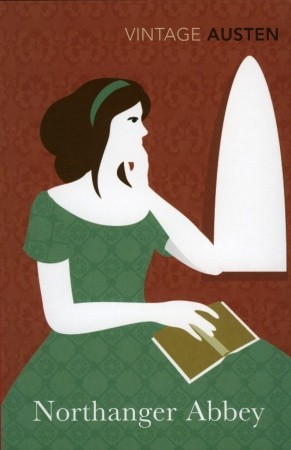 I guess what I'm trying to say is that, while if one met her in real life she may seem a bit too gullible, she's sweet and nice enough that one couldn't help but to like her. She simply needs someone willing to help her understand what people really mean. And not allow others to take advantage of her! *ahem* Perhaps there's a handsome young man of a certain age and personality who'd be perfect for this....?? ;)


Discussion Questions :: Is Isabella a friend or a frenemy? Do you think there's the seed of a genuine friendship between her and Catherine, or is Isabella only loyal to her own ambitions?

I don't know that Isabella falls exactly under that description because I don't see her harboring resentment. (At least not in these chapters, we'll see if that happens later, I suppose.) But I do think she likes the advantage of befriending Catherine on account of James. And I think she likes having a friend who she knows will always agree with her. She likes to feel the center of attention! It seems to me that she's mainly using Catherine at the moment, there's no genuine friendship on her part. I think she's extremely selfish and quite fond of hearing her own voice.

Let's talk about John Thorpe, whose presence is obviously a problem! How would you advise Catherine in her interactions with Mr. Thorpe?

The Thorpe siblings clearly have a lot in common! And not in a good way. John is very much selfishly ambitious and loves to talk about only what he's interested in. If I hear another word on how amazing his horse is.... *frowny face* It's at the moments where Catherine is interacting with him that I wish she could learn to stand up for herself, and also realize that normal (and nice!) people do not talk about themselves so much. Truly genuine people will be interested in those they are speaking with. He needs to go away. And NOW.

Do you agree with Mr. Tilney's comparisons between dancing and marriage? And do you consider dancing an important component of romance?

Firstly, I just love that whole convo between them! It made me smile. (I think that moment might just be when I fell in love with him myself. :) I like the way he's so personable and funny! He teases, but gently, and who doesn't love a guy with a sense of humor? I feel like he's attempting to truly get to know Catherine during that dance. And he makes her feel at ease, she actually responds to him and they converse back and forth. With the Thorpe's she spends most of the time just listening, unable to respond (both because she can't get a word in edgewise and because she has nothing to respond to) and saying little, I love that Mr. Tilney gets her to talk! She's comfortable with him, which is important.

And secondly, I do not consider dancing an important component in modern times. Although, I think it was back in the regency period because how else were two people going to be able to spend time together? They were extremely limited back then in how they could get to know someone they were interested in.

As for Mr. Tilney's comparison....I'm not sure? I think he makes a great case for the similarities between the two though! :D