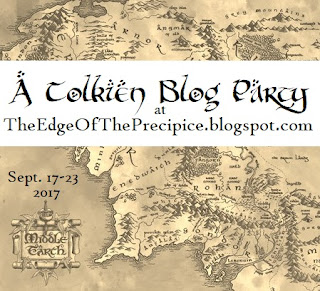 So the lovely Hamlette hosted her fifth annual A Tolkien Blog Party last week and I COMPLETELY FORGOT ABOUT IT. Go figure. That describes this entire year blogging-wise for me. I've forgotten everything! *big sigh* Still, I had planned to participate, so...better late than never, yes? I hope so because here goes nothing! :)

{Thanks, Hamlette! For not minding a late party-goer!}

1. How long have you been a Tolkien fan?

2. Has your love of Middle-earth affected your life?

Not really? Other than I gush about these stories to people in real life if they're willing to listen to me. :D

3. If you had to take the One Ring to Mordor, which character would you choose for your sole companion?

Samwise Gamgee, of course! Sam is just awesome. And wise.

4. Which is scarier, Shelob or the Balrog?

Shelob because I don't DO spiders! *shudder* But to be fair, I'm certain that I'd be a quivering mess of fear were I facing either one...

5. Which two towers do you think Tolkien was referring to in the title The Two Towers?  (i.e. Orthanc, Barad-dûr, Cirith Ungol, Minas Morgul, or Minas Tirith)

I don't really know. I've read all kinds of speculations and everyone has great reasons to support their theories, so I always end up nodding along with them. *shrugs*

Arwen's. Mainly because I really like this particular cloak...

7. What do you think an Ent Draught would taste like?

Something very earthy, I would imagine.

The Shire! But only if I could visit the other places, like Rivendell and Rohan, occasionally. I have enough "Tookish"-ness in me to want to travel a bit. ;)

9. Do you have any Tolkien-related opinions that surprise other people?

I don't think so? It might surprise some people that I've even read his books and loved them though...

10. List up to ten of your favorite lines/quotations from the books or movies.


"In a hole in the ground there lived a hobbit. Not a nasty, dirty, wet hole, filled with the ends of worms and an oozy smell, nor yet a dry, bare, sandy hole with nothing in it to sit down on or to eat: it was a hobbit-hole, and that means comfort."

"His grief he will not forget; but it will not darken his heart, it will teach him wisdom."

"The world is indeed full of peril, and in it there are many dark places; but still there is much that is fair, and though in all lands love is now mingled with grief, it grows perhaps the greater."

"It's a dangerous business, Frodo, going out your door. You step onto the road, and if you don't keep your feet, there's no knowing where you might be swept off to."

"It's like in the great stories, Mr. Frodo. The ones that really mattered. Full of darkness and danger they were. And sometimes you didn't want to know the end… because how could the end be happy? How could the world go back to the way it was when so much bad had happened? But in the end, it’s only a passing thing… this shadow. Even darkness must pass."

"Then something Tookish woke up inside him, and he wished to go and see the great mountains, and hear the pine-trees and the waterfalls, and explore the caves, and wear a sword instead of a walking-stick."