1. Do you play games of luck/chance for money? Have you ever played bingo for money? Visited a casino?  Placed a bet on a horse? Bought a lottery ticket?

Nope to all of the above. The closest I've even gotten to a slot machine was the Las Vegas airport during a layover.

2. Will you be preparing and/or dining on the traditional Corned Beef and Cabbage meal this St. Patrick's Day? Mashed-baked-hash browned-french fried...your favorite way to have potatoes?

I'm not planning on it at this point in time, though I do like it! As for my favorite kind of potatoes? I like them all, but I eat the french fried kind most often.

3. What's the last thing you felt 'green with envy' over?

Hmmmm. I remember being envious of everyone last week who was healthy while I felt miserable!

4. What's at the end of your rainbow?

5.March 12th marks the anniversary of the death of Anne Frank (June 12, 1929-March, 1945). Anne's diary detailing her time spent hiding from the Nazi's during the war ranks as one of the best selling books of all time. Besides your blog, do you keep any sort of diary or journal? Was this a habit you developed as a child or is journaling something new for you?

I do keep a journal around, I don't write in it every day. I mainly write when I get the urge to. (Or if I get inspired to write some poetry, which doesn't happen often.) So that means, sometimes every day, sometimes only once a month. Just kind of depends. I didn't write a great deal when I was a child, I think I mostly started more when I was a teen.

6. What's an item in your home or closet that contains every color of the rainbow?

I bought this tea cup and saucer a few weeks ago. Not sure if it has all the colors of the rainbow, but it has a lot of them! :) 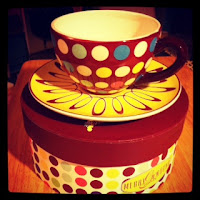 7. Write a limerick with you as the subject. You can do it!! Just remember this is a family friendly blog...don't make me get out my wooden spoon.

There once lived a gal who loved reading,
More time in her day she was needing.
But the books to be read,
Simply piled up instead,
Since the time change was not receding.

8. Insert your own random thought here.

I've officially decided I'm crazy. The other day at work I noticed myself doing the silliest thing! I was taking all the paperclips off of a stack of papers and replacing them with new ones. Which doesn't seem crazy until you find out why.

Because I thought it was only fair that the other paperclips get their turn to be useful.

Yes, I was attributing feelings to inanimate objects. Who does that? Me apparently.

Does that seem sane to you? Or am I certifiable? ;P

There once was girl gone insane,
Paperclips had addled her brain.
Office supplies
Unstabilize.
Beware lest it's you they obtain!