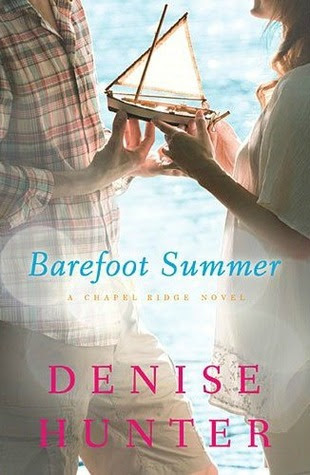 Madison’s heart has been closed for years. But one summer can change everything.

In the years since her twin brother’s drowning, Madison McKinley has struggled to put it behind her. Despite the support of her close-knit family and her gratifying job as a veterinarian in their riverside town, the loss still haunts her.

To find closure, Madison sets out to fulfill her brother’s dream of winning the town’s annual regatta. But first she has to learn to sail, and fast.

Beckett O’Reilly knows Madison is out of his league, but someone neglected to tell his heart. Now she needs his help—and he’ll give it, because he owes her far more than she’ll ever know.

Madison will do anything—even work with the infamous Beckett O’Reilly—to reach her goal. And as much as she’d like to deny it, the chemistry between them is electrifying. As summer wanes, her feelings for him grow and a fledgling faith takes root in her heart.

But Beckett harbors a secret that will test the limits of their new love. Can their romance survive summer’s challenges? And will achieving her brother’s dream give Madison the peace she desperately seeks?

Oh my! Where do I begin? This little book swept me up and swirled me away in happiness! I am so pleased to have another Denise Hunter book that I love as much as Mending Places. It's no wonder I loved it, since both books have similar themes of forgiveness and a heart-meltingly sweet romance. For some reason, I haven't been able to connect to many of Ms. Hunter's books recently. I figured it must be that my tastes had changed or something. But I'm very happy that's not true! So beware, there will most likely be much gushing ahead! :D

The hero-Beckett O'Reilly. What can I say about what an amazing man he is? He is the epitome of the nice guy. I loved the way he couldn't keep his eyes off of Madison. I loved the way he treated his sister. My heart broke for what he had to endure growing up and what his father was like. I could understand that he felt inadequate, but I wanted to shake him a few times to make him wake up to how awesome he truly was! And Madison, she was so much stronger than she gave herself credit for. She felt so unnoticable, if only she knew how "someone" had been noticing her for a whole lot longer than she realized! She's fearful of so many things, but with some tlc she'd be well on her way to truly living life. Because right now, she's just treading water and since she can't swim...well.

When these two are together, things sparkle and shine! They are simply good for each other. They encourage and support and are so gentle and careful. The care they show one another, even before any romance comes into the picture, is wonderful. Because that's what they both need so desperately. Someone to care about them and tell them that they really matter. Oh my heart. It couldn't resist these two at all! The cute push and pull between them. The undeniable attraction. The sweetness of how gentle and kind they are. I love characters who are simply good people. The rebels and bad boys are quite popular, but give me a nice guy any day! And when he falls for the nice girl who is so deserving of him (even if he doesn't think so), I am a very happy reader! :)

It's not all sunny and happy though. Madison and Beckett both have things to work through and these things aren't pleasant. It takes time and forgiveness and understanding. I appreciated the way Ms. Hunter melded the characters crises in with the romance, yet kept things hopeful and sweet. So what I'm saying is, go read this one right now! I fell in love with these characters, with their story, and with the loveliness of Ms. Hunter's writing. I have re-read my favorite scenes several times since finishing the story just a mere day ago! If you enjoy sweet contemporary romances, I don't think you'll be disappointed. I just have one question, when is book two going to get here?!

She hated the anxiety that wormed through her, tweaking her nerves. She wanted to stand up, return to dry ground, but he was going to make her do more.
"Doing great, Madison. Good job."
Next he was going to pat her on the head. "I'm not a dog."
"The water is your friend." She heard the smile in his voice and shoved her hand out, pushing a spray of water at his face.
The force of it pushed her backward, and she was falling. She clutched at air, at water, and found no hold.
He reached for her. She grabbed onto him, steadying herself.
her heart beat against her ribs mercilessly. She opened her mouth to take in oxygen and glared at him.
Water dripped from his nose, his chin. "Tsk, tsk, tsk. Don't bit the hand that feeds you, darlin'."