A Piratical Blogathon & Review: Pirates and Prejudice by Kara Louise 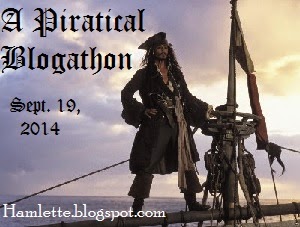 Ahoy, matey! Aye, tis Talk Like a Pirate Day! An' me kind friend, Hamlette, is havin' a party to celebrate. Ye better be headin' right on over there and join in! Or stick around these parts and meet a privateer by the name of Captain Smith who might try an' hornswaggle ye, ifen's yer not careful-like. Yo ho ho and a bottle of rum. Weigh anchor and hoist the mizzen! (And whatever else an actual pirate would say.) (Also, if you're in need of some help in the "pirate speak" department, I discovered this helpful little website.) 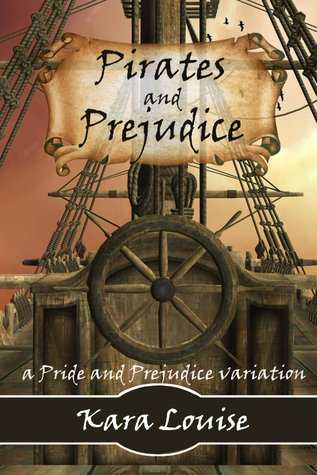 (I contemplated trying to write this entire review in pirate speak, but alas, twas a bit too hard for me. So regular old English will have to do! ;)

Fun! That was the first word that came to mind once I closed the final pages of this book. As a Jane Austen fan, I've read several sequels and retellings of her stories. Some better than others, I admit, but I've read a couple by Ms. Louise before and enjoyed them immensely. So when I got the chance to read this one, I was rather thrilled! And I found it to be a quick and fun bit of Austen-themed fluff. Great for a moment when you're seeking some Jane-related goodness, along with mindless entertainment.

Based around Pride and Prejudice (as if you can't tell, right? ;), the story starts off just after Elizabeth has refused Mr. Darcy's proposal. And proceeds to venture into a completely different storyline from there! This is Mr. Darcy as you've never seen him before. Who would have thought he'd have a bit of pirate inside him? From mistaken identities, rope-swinging across ships, meeting Mr. Bennet's sister and her family, real pirates out for revenge, a possible suitor or two vying for Lizzy's hand, sword fighting and kidnappings, as well the search for a proper pirate crew, and everyone fighting for their lives, the swashbuckling adventure never stops. Ms. Louise packs quite a bit of storytelling in just one little book!

If you enjoy pirate stories, Jane Austen sequels, a bit of both, or are just looking for something a little different, this is the book for you. A bit silly in moments, but who wouldn't want to sail on the high seas with "Captain Smith" along? So just sit back, grab a bowl of popcorn, and let the adventure begin!

"Oh, thank you, so much!" Mrs. Dillard exclaimed. "I do not know whether I am more uncomfortable from being so hungry or soaked from the rain!"
The ladies laughed as Timmons turned to leave, but he abruptly stopped. Elizabeth looked up when she heard a gasp and saw four men standing menacingly at the entrance to the cave. She felt a great sense of foreboding as the men suddenly drew swords, muskets, and pistols from their belts. She shuddered as she noticed their glaring looks and threatening posture.
"Pirates!" Mrs. Joyner screamed and crumpled into a heap on the ground.