I Love Austen Week :: the tag 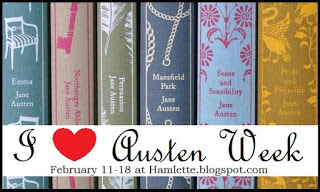 Hamlette's I Love Austen Week continues with this fun list of questions for us. Y'all know I am always happy to gush over Jane Austen related happiness! :D

{If you'd like to participate, please do! The more the merrier.}

1.  Which did you experience first, a Jane Austen book or a movie based on one?

A movie! The very first time I learned Jane Austen existed was on a plane ride where they had Sense and Sensibility '95 playing. I absolutely fell in love with the story! And knew I wanted more.

2.  What is your favorite Austen book?

Anne Elliot, because she resonates with me. {Here's a more indepth explanation if you care to read.} Plus I love her character development over the course of the book. Watching as she "finds herself again. For that's exactly what she does. Find herself. She begins to have confidence that her opinion matters. That she's not just a middle daughter who's always in the background and unimportant. She's a woman with opinions and skills that only she can offer."

Also, her inner strength is very admirable! As Hamlette herself described her, "It takes a lot of inner strength to do something you don't want to do, and Anne does things she dislikes over and over. She gives up the man she loves. She nurses her "sick" sister back to good spirits. She spends time in the company of Captain Wentworth when she'd rather be anywhere but in his presence. She moves to Bath, a city she hates. And she doesn't whine or complain about these things, but does them the way she does everything: quietly and helpfully."

Captain Wentworth! Because he loves my beloved Anne. Plus he's an excellent letter writer! ;)

5.  Do you have a favorite film adaptation of Austen's work?

Nope! I like them all, crazy as that may sound. They all have things I love about them and things that I don't like as well. But an absolute only one favorite? Not possible! :) I can, however, try and pick my favorite adaptation of each book.

For Emma, I love the 2009 version best.
For Persuasion, it's a toss up between the 1995 and 2007. I like both for different reasons and neither of them do I absolutely LOVE, sadly.
For Northanger Abbey, I do LOVE the 2007 version!
For Sense & Sensibility, I think I like the 2008 version better than the Emma Thompson version (although it is perfectly wonderful!).
For P&P, I can't pick just one over the others. I love all of them! :)
As for Mansfield Park, well....I don't have a favorite version currently.

{If you're interested in my thoughts on all the adaptations I've seen... :: Emma & Persuasion :: Sense & Sensibility & Northanger Abbey :: Pride & Prejudice & Mansfield Park ::}

6.  Have your Austen tastes changed over the years?  (Did you start out liking one story best, but now like another better?  Did you think she was boring at first, then changed your mind?  Etc.)

Not really. I have loved everything I've read, my favorite book has not changed, and I've never thought she was boring. However, I will say that after trying the horrible '86 version of Northanger Abbey, I was convinced that I wouldn't like the book. But Hamlette convinced me that I would love it, and even though I still haven't finished it (I know), I thoroughly enjoyed the bits I have read! :)

7.  Do you have any cool Austen-themed things (mugs, t-shirts, etc)?  (Feel free to share photos if you want.)

Yes! I own a couple of very cool things! :) I have this quote in a frame: "But for my own part, if a book is well written I always find it too short." Also, these glasses: 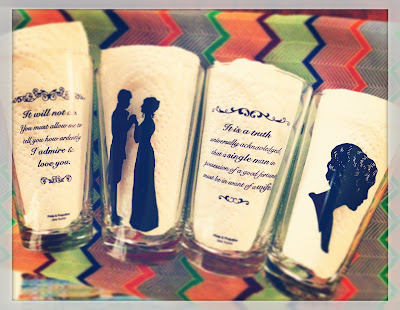 and this infinity scarf: 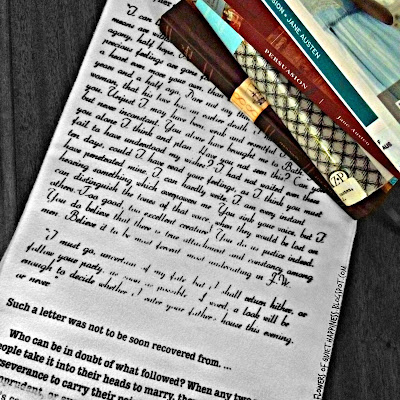 8.  If you could ask Jane Austen one question, what would you ask her?

Rather than simply asking only one question, I'd just love the chance to have an actual conversation with her! To be able to sit down to tea and chat about anything and everything. Perhaps then I might come up with questions to ask, perhaps not. Either way, the chance to talk with her would be amazing! :)

9.  Imagine someone is making a new film of any Jane Austen story you choose, and you get to cast the leads.  What story do you want filmed, and who would you choose to act in it?

I am desperate for an adaptation of Persuasion which keeps all the necessary scenes in the correct order (I'm looking at you, Persuasion '07 *frowny face*) and with actors and actresses that I like (here's a post I wrote about the ones I liked from the '95 and '07 versions). So that's a no brainer. :) But as for what actors and actresses? Whoo boy, I honestly am not sure. Looking back over the comments from that post I mentioned, Kami suggested Richard Armitage as Captain Wentworth and I could really get behind that idea! :D


"I can listen no longer in silence. I must speak to you by such means as are within my reach. You pierce my soul. I am half agony, half hope. Tell me not that I am too late, that such precious feelings are gone for ever. I offer myself to you again with a heart even more your own than when you almost broke it, eight years and a half ago. Dare not say that man forgets sooner than woman, that his love has an earlier death. I have loved none but you. Unjust I may have been, weak and resentful I have been, but never inconstant. You alone have brought me to Bath. For you alone, I think and plan. Have you not seen this? Can you fail to have understood my wishes? I had not waited even these ten days, could I have read your feelings, as I think you must have penetrated mine. I can hardly write. I am every instant hearing something which overpowers me. You sink your voice, but I can distinguish the tones of that voice when they would be lost on others. Too good, too excellent creature! You do us justice, indeed. You do believe that there is true attachment and constancy among men. Believe it to be most fervent, most undeviating, in
F.W.
I must go, uncertain of my fate; but I shall return hither, or follow your party, as soon as possible. A word, a look, will be enough to decide whether I enter your father's house this evening or never."

"Ah! There is nothing like staying at home, for real comfort."

"She felt that she could so much more depend upon the sincerity of those who sometimes looked or said a careless or a hasty thing, than of those whose presence of mind never varied, whose tongue never slipped."

"If I loved you less, I might be able to talk about it more."

"Let us never underestimate the power of a well-written letter."

"I cannot speak well enough to be unintelligible."

"Oh! I am delighted with the book! I should like to spend my whole life in reading it."