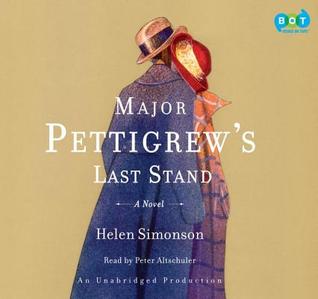 I really enjoyed this one! I listened to the audio version and Peter Altschuler does a fine job as narrator. His voice was perfect for the Major! As I listened, I could easily picture him in all his gruff honorableness and proper way of living. I laughed so very many times during this story! :)

I loved the Major. I really did, even if he frustrated me a few times, just as he did the other characters. But for all his insistence on doing things properly, I easily empathized with him when everyone else around him refused to listen! I'm not so certain we'd get along in real life, but in fiction? He's hilarious and wonderful. And watching him navigate the myriad of situations, never knowing which one may explode all over him, is simultaneously funny yet bittersweet. He's such a lonely man and I was glad he and Mrs. Ali struck up their friendship. I loved their literary conversations and just how they understood one another. They both needed someone completely in their corner and I was happy they found each other.

But there were other bits that frustrated me with this story. For one, much as I loved the Major and Mrs. Ali, there weren't a lot of other characters I liked. In fact, there were several I couldn't stand. I kept hoping I'd change my mind about Roger, his son, but I ended the book severely disappointed in that. And several of the other characters never grew on me either. I did end up liking Sandy! I really, really wanted to hug Sandy at the last actually. As for Ms. Simonson's writing, well.... She's a great writer! She is. When I started the book, I loved her style immediately. But somewhere by about halfway through, I found myself getting a bit tired of all the lengthy descriptions and I'd skim through paragraphs to get back to the meat of the story. I'm not sure why that happened, but when I closed the final chapter, I looked back at my reading experience and thought, "Meh." By then, I was just glad to finally be finished.

Disappointments aside, I did enjoy this story. I was pleased the Major finally stopped letting other people's opinions impact how he lived his life! I'd read the book again just to spend more time with him actually. He really was the best thing about it and all his little commentary on everyone around him makes me giggle just remembering back on it now. For a glimpse of life in a proper English village, where everyone has loads of opinions and ideas for how everyone else should live their life, and to meet the awesome Major Pettigrew himself, I'd recommend trying this one! :)

"You are a wise man, Major, and I will consider your advice with great care—and humility." He finished his tea and rose from the table to go to his room. "But I must ask you, do you really understand what it means to be in love with an unsuitable woman?"
"My dear boy," said the Major. "Is there really any other kind?"

It surprised him that his grief was sharper than in the past few days. He had forgotten that grief does not decline in a straight line or along a slow curve like a graph in a child's math book. Instead, it was almost as if his body contained a big pile of garden rubbish full both of heavy lumps of dirt and of sharp thorny brush that would stab him when he least expected it.