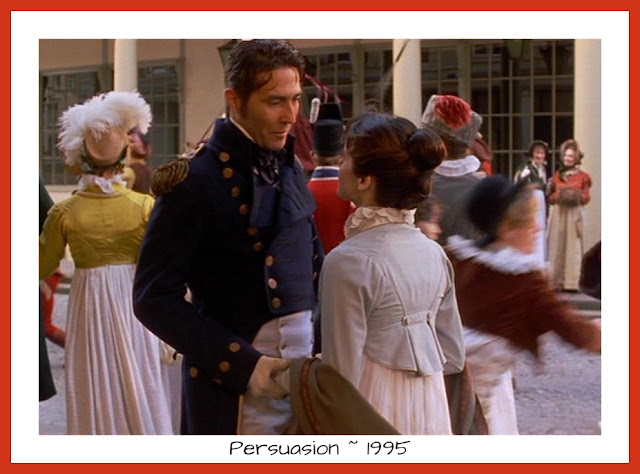 Anne: Charles, please assure Captain Wentworth and Captain Harville that we hope to see them tonight.
Charles: That was understood.
Anne:  No, I don't think so. They must come, do you hear? You'll see them again. Promise me you'll mention it.
Charles: Mention it yourself. Frederick, which way are you going?
Frederick: I hardly know.
Charles: Are you going near Camden place? If you are, take Anne to her father's door. She's done for this morning and I'm eager to see a gun, like that double-barrel of mine you once shot with.
Frederick: I shall have time to take her, Charles.
Charles: Thank you.
*He leaves*

Frederick: I tried to forget you. I thought I had.


Oh friends. I hadn't watched this movie in quite a long time, but I stumbled upon this awesomely fun podcast the other day. These ladies talked about all the reasons why they did and didn't like both the 1995 and 2008 versions of Persuasion. And while listening, I was persuaded (see what I did there? Of course you did! ;) to watch the 1995 version again.

Oh my goodness! I am now completely convinced of this version's superiority! I mean, I always knew it was better, but I still rather liked Rupert Penry-Jones as Wentworth (because, yes, he's rather nice to look at, I freely admit it! :) from the 2008 version. But Ciaran Hinds.... Oh my stars, that man has a way of looking at Anne...!! *swoon* The podcasters mention how they noticed he never looks at her in the beginning of the movie and they were right! He looks just over her head or just past her, but never in her eyes. Until Lyme. And then he notices. Oh man does he ever notice. From there on out he holds nothing back and just stares at her... Ah my heart!!

Anyway. You're not here to listen to me gush about how Wentworth looks at Anne. (Although surely you agree with me, right?? ;) Mainly, I simply had to come over here and put it out there officially. The 1995 Persuasion is DELIGHTFUL. There is so much of the book within each scene that the filmmakers clearly understood the perfection of writerly awesomeness they were working with. And so refused to make any horrific and terrible and awful and horrifyingly, glaringly wrong choices when it came to adding or changing things up! (I'm looking at you, 2008 Persuasion filmmakers...humph.)

I will admit, that I'll probably still occasionally watch the 2008 version, purely for the pretty of Rupert of course. And there are some wonderful scenes in it. But overall, I have to officially hand the trophy of best version to 1995. WAY superior. (And I can now even admit that Ciaran is awfully handsome as well. A few years ago I'd've never in my dreams have admitted that. But I stand corrected. And happily! ;)

What about you? Have you seen both versions? Did you enjoy both versions? Or no....? Tell me, tell me! I'd love to chat about Persuasion with someone again! It's been much too long...