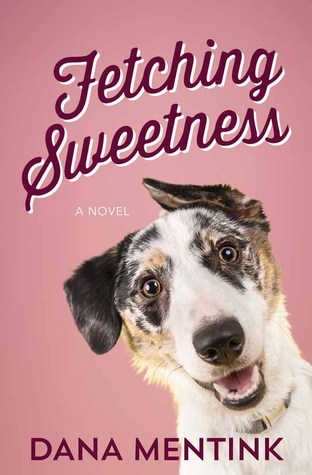 After the cuteness of Sit, Stay, Love, I knew I'd want to read more by Ms. Mentink. Because these dogs are super adorable! In this one, we get to meet Sweetness, who is a huge, overgrown ball of fluff who has a heart of gold. Really, there's simply no way for you not to fall in love with him! :)

Pick up this book because of the dog, but continue reading for the humans! Stephanie and Rhett reluctantly join forces early on, and while the sparks do fly between them, they've both got a lot of growing to do. He's made some mistakes he's working to correct, while she's trying to do the right thing for a difficult client. Together they slowly become friends and start asking the hard questions. (You know, the kind that make you take a step back and really think about your choices and what exactly you're hoping to accomplish.) Their little debates amused me, especially once they became aware of the attraction between them. Add in Sweetness, whose tendency to run away just added to their adventures, and you end up with quite the interesting roadtrip! Watching them navigate their way through all the unexpected was entirely too fun.

This little book was perfect for a day when I needed something light and fluffy to read. And where I was guaranteed my happy ending. Sometimes, you just need to turn your brain off and read a sweet story, right? :)

"Spencer?"
She started. "It's a name stuck in my memory."
"A pet?"
"No, but he was a dog, for sure."
Judging by the look on her face, Spencer had done more misbehaving than chasing after squirrels. Rhett wasn't about to dig into that particular can of wigglers. "Why don't you try calling Sweetness without the hot dog incentive to see if he recognizes his name?"
"Right. That's a good idea." She put down her snack and walked a good ten feet away. The dog eyed her from his upside-down position. "Sweetness?" she called in a soft voice.
The dog rolled over, sprang to his feet, and careened over to her so fast his paws roiled up two columns of dust. She stepped back in alarm. Sweetness reared up and put his paws on her jacketed shoulder. Having finally got the well-dressed lady right where he wanted her, he began to lick her face with energetic swipes of his enormous tongue.
She made a gurgling sound, threw up her hands, squealed, and thrashed until Rhett finally grabbed the end of the rope and pulled the dog away. He couldn't help laughing.
"It's very rude to laugh, you know." Stephanie said.
Rhett mumbled an apology.
Satisfied with his performance, Sweetness meandered toward the shrubbery to pee on selected branches.
Stephanie wiped the drool off her face with the back of her hand and looked at the dog with disgust.
"Congratulations," Rhett said. "You really did find Sweetness."